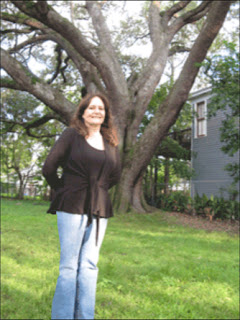 We continue with the newsletter feature “Spotlight on Heights Business Member” -- this month spotlighting Design & Inspiration. You may have noticed that recent newsletter issues have been focusing on a local business. These businesses are drawn from business cards collected at the Houston Heights Association Business Mixer. Stay tuned for the next Quarterly mixer in January.
Angela DeWree is principal of two companies: Design & Inspiration and PartyProps2go. Angela, a native of the San Francisco Bay Area of California, moved to Houston with her father’s oil company transfer. Interestingly, the date of Angela’s move to Houston involved many seven’s - she moved here on 7/7/77, also her birthday. Angela has family who live north of town. Prior to settling in the Heights, Angela lived in the museum district and Montrose.
Angela moved to the Heights fifteen years ago. She was driving around, not really thinking about the Heights, when she drove down the Boulevard and saw the house that became her own. Her parents and grandparents had lived in bungalows in California, so she was attracted to this Heights bungalow. The attraction of the Heights is the authenticity of the old houses and trees for this ‘tree hugger.’ Angela took it as a sign that this house was meant to be hers when she closed on her birthday and found a key left beside the sink on a key ring bearing the name Shirley, also her mom’s name.
Angela’s first Houston Heights Association contacts were Chris Silkwood, Julie Pettit, and Kelly Simmons. For those of you involved with the Boulevard Reforestation Project, you’ll remember Angela’s sign that measured the fundraising progress, which was located at 11th Street and Heights Boulevard. Through Julie and Kelly, Angela was recruited to help with spring and holiday tour collateral and to run for the Heights Association Board of Directors, where Angela currently serves. The acquisition of 1414 Ashland began Angela’s involvement with the tree counting projects.
Angela career includes Neiman Marcus in the Fashion Office and Visual Manager in Houston, Dallas, and Bal Harbour; Marshall Fields as Visual Manager of the Texas Division; and Tootsies’ Creative Director for 10 years. Angela’s event work has taken her throughout Asia creating galas and holiday décor for Hyatt Asia Pacific, grand openings for luxury clients across the country, and parties galore for art groups & museums. In 1995 she opened her own business. That is why she was perfectly suited for decking out the former Kaplan’s-Ben Hur with the mannequins for the 2006 Spring Tour Candlelight Dinner. Some Heightsites got a laugh when they saw the dusty mannequins being ‘bathed’ at the power car wash prior to ‘dressing’ for the event. You can see one of those Kaplan’s mannequins in the Karen Derr office today.
Away from work, Angela enjoys meeting friends for Friday night dinner and Sunday morning breakfast. The same Friday night dinner group has gathered for the last twenty years.
As for Angela’s pets, they include Kitty DeWree, an 18-year old half-Siamese, half-tabby and finches. Angela acquired the finches after a Gala Party where they were placed in a wonderful Asian birdcage collection to decorate the venue. Following the fundraiser, Angela adopted all of the finches.
Next time you need advertising, merchandising or displays, please support Heights business member Angela DeWree and her company Design & Inspiration. If you’re a business member, remember to check the calendar for the next Houston Heights Association Business Mixer and come and meet Angela and other business members at the meeting.

Land Along White Oak Bayou at E. 5th Preserved as Green Space Habitat for wildlife and Texas native trees, flora & fauna --  this area is the last undeveloped parcel in the Heights - - and included in the original land grant for Houston.  It now preserved for posterity. Bikers and hikers using the MKT Trail approaching White Oak Bayou from the northwest may have noticed a  patch of wooded land to their right and wondered when and how it would be developed. Thanks to Houston Parks  Board and Harris County Flood Control District, this parcel of land will be preserved as open space while making  the White Oak Bayou watershed more resilient against flooding.  Neighbors on E 5th, Oxford, Fraser, and Granberry Streets can finally stop worrying that development of the  property would drive traffic down their streets. Several attempts to turn the parcel into apartments, townhomes, or  condominiums have failed over the years due to lack of adequate street access for residents and
Read more